Verify that NGINX Plus is operating in conformance with the FIPS 140-2 Level 1 standard.

When used with a FIPS 140-2 validated build of OpenSSL operating in FIPS mode, NGINX Plus is compliant with the requirements of FIPS 140-2 (Level 1) with respect to the decryption and encryption of SSL/TLS‑encrypted network traffic.

NGINX Plus uses the OpenSSL cryptographic module exclusively for all operations relating to the decryption and encryption of SSL/TLS and HTTP/2 traffic.

When NGINX Plus is executed on an operating system where a FIPS‑validated OpenSSL cryptographic module is present and FIPS mode is enabled, NGINX Plus is compliant with FIPS 140-2 with respect to the decryption and encryption of SSL/TLS and HTTP/2 traffic.

Verification of Correct Operation of NGINX Plus

The following process describes how to deploy NGINX Plus in a FIPS‑compliant fashion and then verify that the FIPS operations are correctly performed.

The process uses Red Hat Enterprise Linux (RHEL) version 7.4 as an example, and can be adapted for other Linux operating systems that can be configured in FIPS mode.

Step 1: Configure the Operating System to Use FIPS Mode

For the purposes of the following demonstration, we installed and configured a RHEL 7.4 server. The Red Hat FIPS documentation explains how to switch the operating system between FIPS mode and non‑FIPS mode by editing the boot options and restarting the system.

Step 2: Verify the Operating System and OpenSSL Are in FIPS Mode

Determine whether OpenSSL can perform SHA1 hashes: This test verifies the correct operation of OpenSSL. The SHA1 hash algorithm is permitted in all modes, so failure of this command indicates that the OpenSSL implementation does not work properly:

Determine whether OpenSSL can perform MD5 hashes: This test verifies that OpenSSL is running in FIPS mode. MD5 is not a permitted hash algorithm in FIPS mode, so an attempt to use it fails:

If OpenSSL is not running in FIPS mode, the MD5 hash functions normally:

Step 3: Install NGINX Plus on the Operating System

Observe that the version number of the OpenSSL library includes the –fips suffix. This indicates that the library is FIPS‑validated, but does not confirm that it is running in FIPS mode.

Configure NGINX Plus to serve a simple SSL/TLS‑protected website: Add the following simple configuration to NGINX Plus:

If necessary, you can generate a self‑signed certificate for test purposes:

Verify that you can access the website using HTTPS from a remote host. Connect to the NGINX IP address using the openssl s_client command, and enter the HTTP message GET /:

Use openssl s_client for this test because it unambiguously confirms which SSL/TLS cipher was negotiated in the connection. After some debugging information (including the cipher selected), the body of the default “Welcome to nginx!” greeting page is displayed.

FIPS 140-2 disallows the use of some cryptographic algorithms, including the Camellia block cipher. We can test compliance with FIPS 140-2 by issuing SSL/TLS requests with known ciphers on another (non-FIPS-mode) server:

This cipher is insecure and is disabled by NGINX Plus by default. The SSL handshake always fails.

This cipher is considered secure but is not permitted by the FIPS standard. The SSL handshake fails if the target system is compliant with FIPS 140-2, and succeeds otherwise.

Note that if you attempt to issue the client request on a host running in FIPS mode, it fails because the OpenSSL client cannot use this cipher.

This cipher is considered secure by NGINX Plus and is permitted by FIPS 140-2. The SSL handshake succeeds.

Which Ciphers Are Disabled in FIPS Mode?

The FIPS 140-2 standard only permits a subset of the typical SSL and TLS ciphers.

In the following test, the ciphers presented by NGINX Plus are surveyed using the Qualys SSL server test. In its default configuration, with the ssl_ciphers HIGH:!aNULL:!MD5 directive, NGINX Plus presents the following ciphers to SSL/TLS clients: 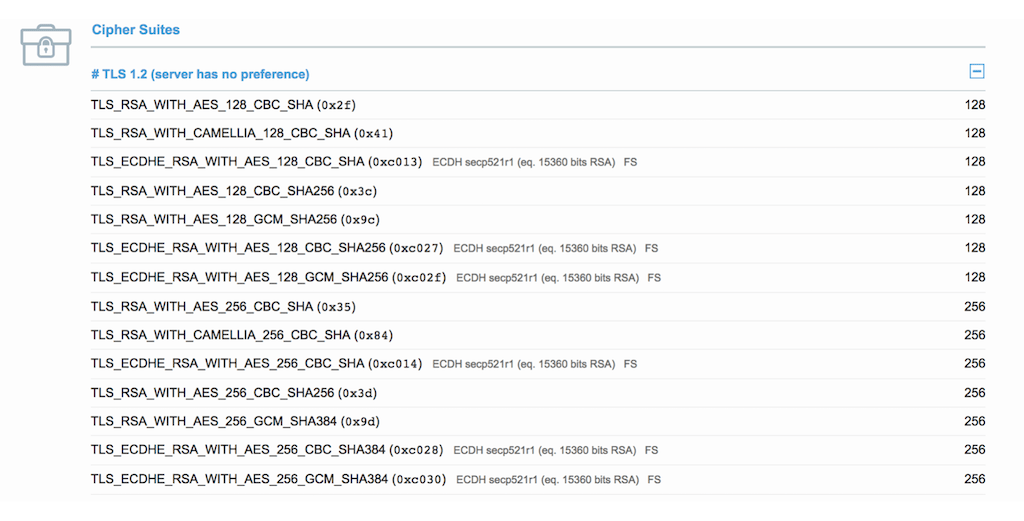 When you configure NGINX Plus with the ssl_ciphers ALL directive, NGINX Plus presents all the relevant ciphers available in the OpenSSL cryptographic module to the client. FIPS mode disables the following ciphers:

NGINX Plus can be used to decrypt and encrypt SSL/TLS‑encrypted network traffic in deployments that require FIPS 140-2 Level 1 compliance.

The process described above may be used to verify that NGINX Plus is operating in conformance with the FIPS 140-2 Level 1 standard.