Create a highly available active-active deployment of NGINX Plus on AWS in combination with AWS Network Load Balancer (NLB).

This guide explains how to create our recommended solution for a highly available, active‑active deployment of NGINX Plus in the Amazon Web Services (AWS) cloud. The solution combines the AWS Network Load Balancer (NLB) for fast and efficient handling of Layer 4 traffic with NGINX Plus for advanced, Layer 7 features such as load balancing, caching, and content‑based routing. The combined solution is fast, powerful, reliable, and likely to be relatively low‑cost.

This guide explains how to set up an AWS NLB in front of one pair of NGINX Plus load balancers. (You can increase resiliency as needed by following the same steps for additional NGINX Plus instances.)

The Appendix provides instructions for creating EC2 instances with the names used in this guide, and installing and configuring the NGINX software on them.

AWS NLB is ideal for fast load balancing of TCP traffic, as it’s able to handle millions of requests per second while maintaining ultra‑low latencies. This enables AWS NLB to more easily handle volatile traffic patterns – patterns with sudden and dramatic changes in the amount of traffic.

NGINX Plus is complementary to NLB. Operating at Layer 7 (the application layer), it uses more advanced load‑balancing criteria, including schemes that rely on the content of requests and the results of NGINX Plus' active health checks.

NGINX Plus provides both reverse‑proxy features and load‑balancing features, including: 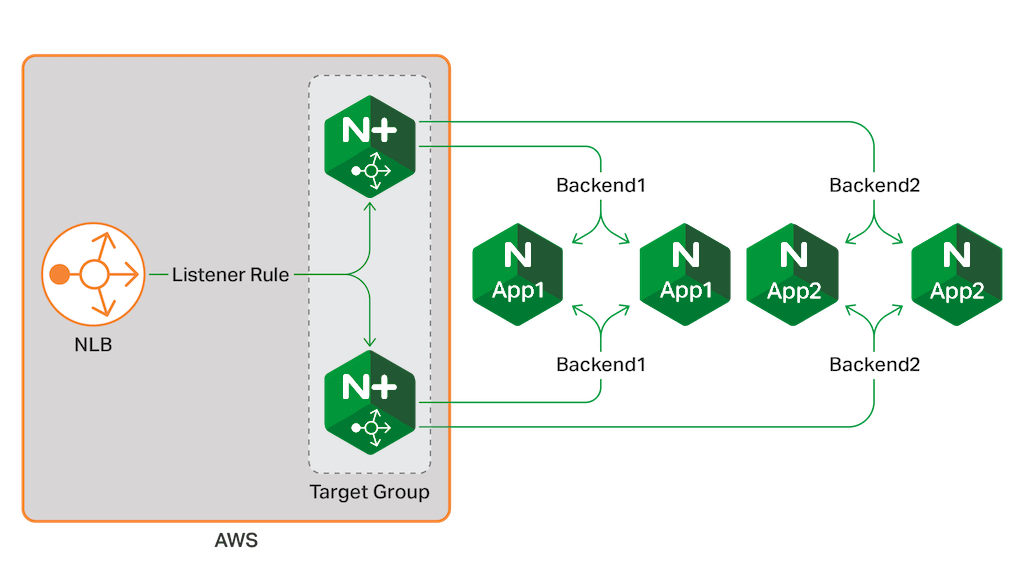 AWS NLB handles Layer 4 TCP connections and balances traffic using a flow hash routing algorithm. By default, an AWS NLB has a DNS name to which an IP address is assigned dynamically, but you can optionally attach an Elastic IP address to the AWS NLB to ensure that it will always be reachable at the same IP address.

The AWS NLB listens for incoming connections as defined by its listeners. Each listener forwards a new connection to one of the available instances in a target group, chosen using the flow hash routing algorithm.

These instructions assume you have the following:

With NGINX Open Source and NGINX Plus installed and configured on the EC2 instances (see the Appendix), we’re ready to configure an AWS NLB for a highly available, all‑active NGINX Plus setup.

In the Step 2: Configure Routing window that opens, you create a target group, which contains the set of EC2 instances across which your AWS NLB load balances traffic (you’ll specify those instances in Registering Instances in the Target Group).

Registering Instances in the Target Group

In the Step 3: Register Targets window that opens, you add instances to the empty target group you created in the previous section. For this guide, we add both of our NGINX Plus load balancer instances.

In the Step 4: Review window that opens:

This Appendix provides links to instructions for creating EC2 instances with the names used in this guide, and then installing and configuring NGINX Open Source and NGINX Plus on them:

As an alternative to creating and configuring instances individually, you can use our Packer and Terraform scripts to completely automate the process:

After completing the instructions, you have completed the prerequisites for this guide and can continue to Configuring an AWS Network Load Balancer.

Assign the following names to the instances, and then install the indicated NGINX software. The screenshot below shows the resulting Instances table.

For the purposes of this guide, you configure the NGINX Open Source instances as web servers that return a page specifying the server name, address, and other information. As an example, here’s the page returned by App 1:

Step‑by‑step instructions are provided in our deployment guide, Setting Up an NGINX Demo Environment.

Repeat the instructions on all four web servers:

Configuring NGINX Plus on the Load Balancers

Step‑by‑step instructions are provided in our deployment guide, Setting Up an NGINX Demo Environment.

After executing the scripts, you can jump directly into the instructions for creating an AWS NLB without any further setup. Additionally, the scripts create a new set of networking rules and security group settings to avoid conflicts with any pre‑existing network settings.

Note: Instead of using the default VPC like the instructions in our Deployment Guide, the scripts create a new VPC.

The script launches two NGINX Plus load balancer instances and four NGINX web server instances and configures the appropriate settings on each instance to run the guide.

If you want to delete the infrastructure created by Terraform, run the cleanup.sh script.